Let the “Tug Be Your Drug”
By Capt. Charles Newton & assisted by Capt. Aerich Oliver

That fantastic “Tug” of the big black drum is an awesome adrenaline rush and can be so fun it feels like a natural high thus being let the “Tug Be Your Drug”. The big and when we say big we’re meaning black or red drum that are over 30”. They are prevalent this time of the year.

The black drum run is on and big time NOW, call it what you want but we are all talking about the annual drum run. To us it is the second most exciting fish to catch. The first being a redfish. Fighting a black drum for 20 minutes to an hour is a whole lot of fun and pumps you up. We love to see the excitement of the people’s faces, especially the kiddos. The first expression are “WOW” I’ve hung the boat headed for China or anywhere but here. Then next you hear complaining that the fish is wearing the fisherperson out, complaining of hurt hands from gripping the rod or aching shoulders or tired arms. Then the natural high kicks in and they can’t wait to see this monster of the deep. But the final smile comes when we net the HUGE fish and it is a sight to behold, as you can see in the pictures. They can’t believe that they actually caught this fish. As the fish is carefully brought aboard the complaining begins again when we make them pose for a picture holding the black drum up. Try holding 30-50 pounds up either sideways or up and down. It’s not easy, especially when someone behind the camera is trying to focus or have you move over out of a shadow or yea, you’ve been there. Another interesting thing about this fish is the unique sound they make when laying on the deck of the boat They make a croaking or drumming sound with the air bladder, which is the reason for the common name drum. You can sometimes hear these sounds while in the boat coming from the depths of the water while a school passes underneath. 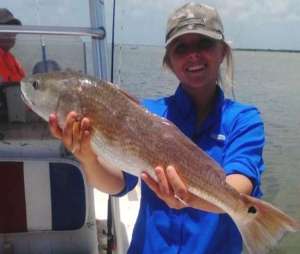 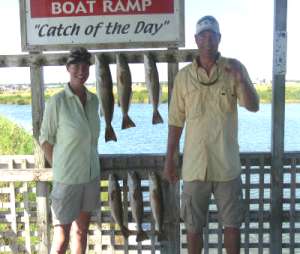 Black drum is perhaps the most notable drum for its annual run of the bull drum. In many of our deeper bays, ship channels and some jetties in the Gulf, the large drum gather in schools before spawning. This all occurs in February and continues most of the month of March each year. Some compare landing a 40 pound drum with trying to pull a forward moving vehicle backwards. We devote a lot of time to the black drum this time of the year. It is probably the best chance many anglers will have to land a 30-50 pound fish. Drum are found in the clearest of waters off the sand flats to the muddiest of waters. This adaptability makes the black drum available to more anglers than any other saltwater bay fish.

The puppy drum which are often called “choice fish” are great for eating and 5 can be kept if they are over 14” and under 30” per day. Rather than eating these larger drum, anglers are encouraged to release them to spawn and fight again another day. “Spaghetti worms” as we call them are common in these larger drum. While unappetizing, they are not harmful to consume by humans. Remember after the huge fight these awesome fish have fought they bloat themselves up and have to be what I call de-flated. You can purchase a small inexpensive deflating tool at any tackle shop. To do this lay the fish on its side and punch a hole just below the lateral line to let the air out, sometimes you have to put pressure on the side of the fish to help release the air. Return the fish to the water and gently move it up and down until it swims out of your hand. This process keeps them from floating away to a certain death. 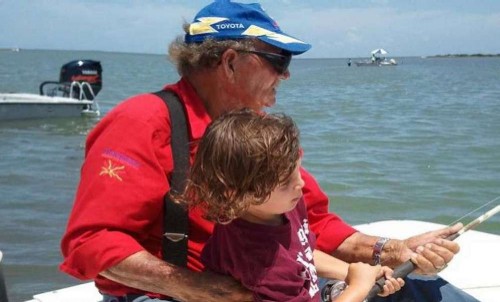 Black drum have whiskers under the lower jaw, and are a chunky, high backed fish. They range in coloration of light gray to golden to black. The bellies of the older fish are white. Black drum grow from 6” the first year to 12” the second and 16” the third year. Increasing about 2” per year after that.

They eat a variety of baits and often “mouth” the bait for some time before swallowing it, and the fisherman must be patient and wait until the fish moves off with the bait before jerking. At this point you sure don’t have to ask “did I get a bite?” Their diets include small crabs, algae, small fish, mollusks and shrimp. We usually fish with crab or shrimp to catch them. They have no canine teeth like those of the trout but they do have highly developed pharyngeal teeth (in the Pharynx or throat) which are used to crush the crabs or mollusks before swallowing.

Fighting these drum can be done on almost any type of rod and reels. We equip our boat with light to medium tackle. Part of the fun is seeing the fight between angler and fish. We enjoy seeing anyone sweat while trying to land these action packed fighters. Again that is where the natural high comes in in tugging on these fish and let the adrenaline kick in to be your drug. We usually use 12 lb. test line on a 7 ½’ medium light rod. 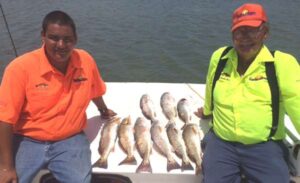 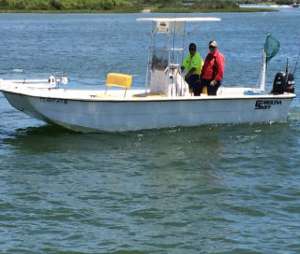 Just for the records from Texas Parks and Wildlife the Rod & Reel record for Black drum is 78 pounds measuring 51.18” and caught in 1988 from the Gulf of Mexico. The largest black drum on record weighed 146 pounds.

When the drum run is going on you can choose to fish for them all day or fish for them ½ day and fish for redfish the other half day. Capt. Aerich Oliver is my grandson or myself will be happy to take you on the trip of a lifetime and you can see why we say let the “Tug Be Your Drug”. To book a fishing trip with us, Beverly will be happy to discuss any questions about your trip or bookings with you. My website is www.redfishcharters.com or you can check us out and befriend us or like our page on Facebook, Redfish Charters, Rockport, Texas also. We post current pictures of our catches and fishing posts and news on Facebook. Our website has lots of information on it including FAQ (frequently asked questions) page as well as a link to Texas Parks and Wildlife’s website. Spring Break is coming up shortly and books up fast. Beverly better known as the Admiral or Boss Aggie answers the phone 24/7.